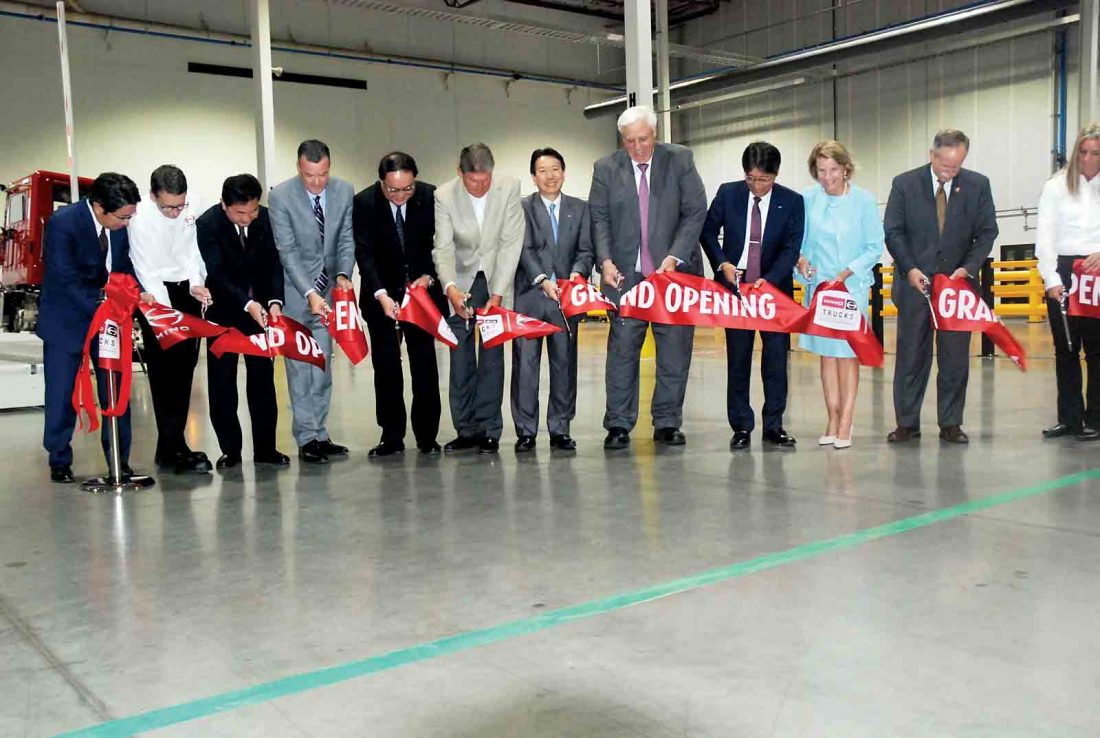 Hino Motors, the Japanese Truck Manufacturer, who first came to Wood County back in 2007, is expanding, and doing so in a big way.

Company leaders announced a plan to invest an additional $40 million and create another 250 jobs here.

Hino spent $60 million turning the 1 million square foot former Coldwater Creek distribution center into a state-of-the-art truck manufacturing facility. There are 470 people employed there, with the expectation that number will reach 550 next year.

These are great numbers and most assuredly citizens of Washington County will see enhanced opportunity for employment (should they desire it…we are at near full employment sitting at 3.9%) with the planned announcements by Hino.

I get asked often why we in Washington County can’t seem to execute projects like this.

There are so many reasons and the explanations would take hundreds of pages, but simply put, we haven’t been desperate enough to take risk.

It is difficult to imagine, but our local economy for all its ups and downs, has been remarkably stable for the last 20 years. While unemployment rates soared in Monroe, Noble, Meigs, Wood County (WV), Washington County maintained a modicum of success due to its diverse employment base and successful industry clusters in plastics/polymers, biomedical devices, and oil and gas service sectors.

Because of this comfort we haven’t been forced to take significant risk as a development community. What risk am I talking about?

They expanded the city limits to encompass (Coldwater Creek), so they could have water and sewer and fire and police protection,” says Commission President Blair Couch, whose father, David Couch, a commission member in the 1990’s. “I recall my father talking about the number of concessions they made to get that facility there. They employed a lot of people; it was a sad day to see them go under. And we certainly hoped someone would step forward.

Wood County ended up owning the Coldwater Creek facility from 2014 to 2018, and maintained the responsibility for upkeep, utility service continuation, and site marketing.

To our north, the Mahle Facility in Caldwell OH went dormant in 2008 and the Noble County Community Improvement Corporation assumed the burden of maintenance and utility upkeep…….at least for a while. When the burden became too great they sold the facility to a regional developer who had little plan for the 289,000 ft2 facility directly off Interstate 77, and here we remain, a decade later and the facility becomes more of an albatross everyday.

What would it look like for Washington County to attempt to play the economic development game that neighbors have now successfully played for the last ten years?

This is a question we are going to explore at our annual meeting in October, and we would very much like to have community members there to hear where professionals see our community in the effort, what we are doing, what we aren’t doing, and what our elected leaders and industry professionals believe is achievable and worthy of pursuit.

Until then, we celebrate the successes of those around us, hoping that by their example we will aspire to be better. 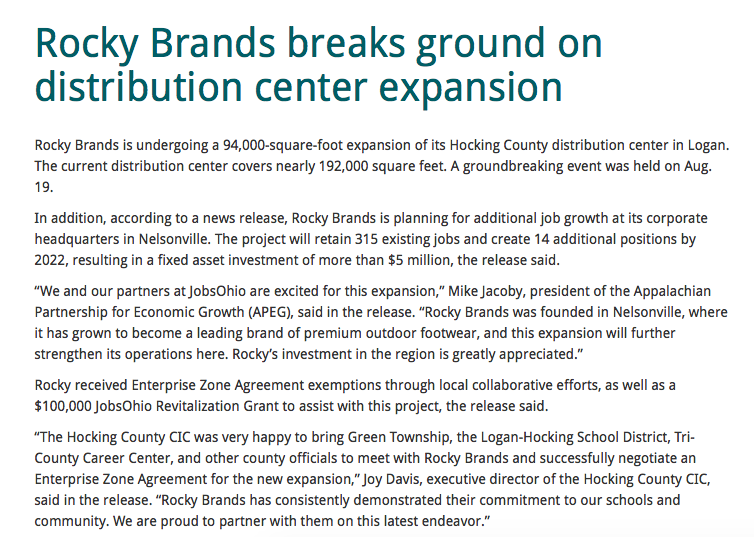 Not quite a neighbor, Hocking County doesn’t quite touch Washington County, but given its size and business makeup, its a signal marker for us. Here Rocky Boot announced 14 more hires and $5 million in CapEx. What sticks out to me is the mention of the “Enterprise Zone Agreement” and JobsOhio Revitalization Grant funding.

Enterprise zones are designated areas of land in which businesses can receive tax incentives in the form of tax exemptions on eligible new investment. The Enterprise Zone Program can provide tax exemptions for a portion of the value of new real and personal property investment (when that personal property is still taxable) when the investment is made in conjunction with a project that includes job creation.